The Caterham Superlight R500 has broken the world road car record for speeding from standing to 100mph and then back to standing, completing the test in an astounding 11.44 seconds.

The previous record time of 11.50 seconds had been set in 1999, in a MacLaren F1 LM car, specifically shod in bespoke race tires.

The 0-100-0 exercise, designed to separate the men from the boys when it comes to fast cars, was conducted a fortnight ago at Bruntingthorpe airfield. 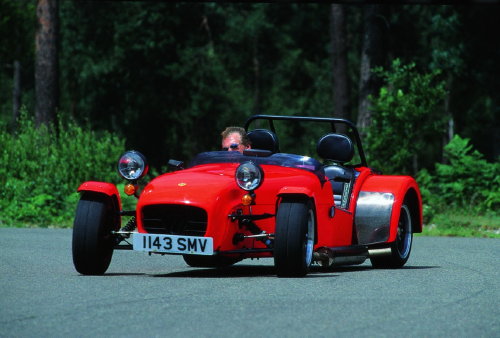 It was part of a series of tests conducted annually by the editorial team from Autocar Magazine.

Test co-ordinator, Steve Sutcliffe commented: ‘In our experience 0-100-0 is the defining test of what is – and what isn’t – a genuinely rapid road car.

Ideally, your entrant will be light, very powerful, have great traction, a snappy gear change, well laid-out pedals and, most importantly of all maybe, a massive – and friendly to use- set of stoppers.

‘The Caterham R500 is the greatest expression of straight-line speed merged with awesome braking ability.’

Amongst the considerable scalps claimed by the British sportscar maker were the Pagani C12 S (11.84 seconds), the Porsche 911 Turbo (13.02 seconds) and the Lamborghini Murcielago (13.90 seconds).

Caterham’s Managing Director, Simon Nearn, was delighted with the result: ‘When we created the R500, we spared nothing in our determination to reduce weight and then packed all the performance into it we could.

We designed it specifically to go fast and stop fast. I am not surprised we finished top of the pile!’

The complete test results are in the 25 September edition of Autocar.

We’ve concluded a report for the best high-performance car batteries here and we believe you should take it into consideration if you are planning to change the battery of your Caterham R500.

To take the most out of your Caterham, make sure to use some of the best synthetic oils in the world stated in our comparison here and also don’t forget to look at our detailed report about the longest lasting car wax here.