It’s the car that established Honda as one of the world’s major manufacturers, it’s become synonymous with the success and efficiency of the brand, and over two million have been sold in Europe only up until 2002.

Honda celebrated the 30th anniversary and global success story that is the Civic with a special Type-R 30th Anniversary model.

Its basis was the rapturously received, standard Type-R, the most potent product in the history of the range.

And to accompany it and as part of the celebrations, Honda also introduced a new Civic 3 door 1.6 Sports model.

Making its debut at the Paris Motor Show, this special Type-R was the same no-compromise sports thoroughbred that has rapidly gained iconic status since its launch.

But added exclusivity was provided by a more performance-orientated interior restricted to this limited edition. 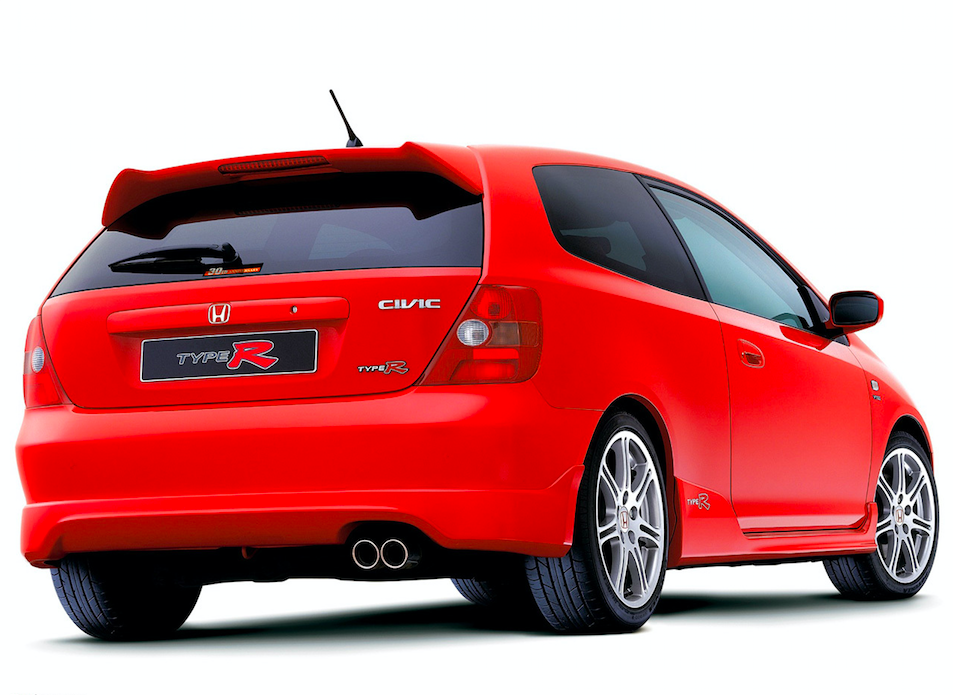 Seats from the world-renowned manufacturer, Recaro, replace the standard competition-style items for even greater support and grip during enthusiastic driving, and another manufacturer closely linked to competition cars, Momo, has supplied the Type-R 30th Anniversary’s leather-trimmed steering wheel.

The seats are a striking red color that, together with red door linings makes clear the car’s performance intent.

The tinted privacy glass used for the rear and rear quarter windows adds to its lean, mean and focused road-going race car philosophy.

And as a final touch, a ‘30th Anniversary’ decal is applied to celebrate the special milestone reached by the Civic.

The Type-R 30th Anniversary continued to offer the same exhilarating performance – 0 to 60 mph in 6.8 seconds and 146 mph top speed – from the mighty 200 PS (147 kW) 2.0 liter DOHC i-VTEC engine mated to a close-ratio, 6-speed manual gearbox of the standard model.

Type-R specification includes a chassis with firmer dampers and springs and extra body stiffening compared to the rest of the Civic range and 205/45 R17 tires providing outstanding grip and handling.

Yet despite these high-performance credentials, it can behave with absolute docility in city traffic.

Sales of the Type-R 30th Anniversary commenced in December 2002.

Type-R – where ‘R’ stands for racing – is a flag-bearer for the sporting values of the Civic range. 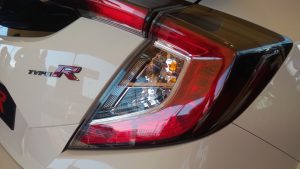 It’s also part of a sub-brand that traditionally encapsulates the company’s innovative engineering capabilities and enviable sporting pedigree within a unique road car package – the link with Honda’s motorsport heritage.

All Type-R models have the resolute purpose of providing a sublime driving experience, aimed directly at the enthusiast who seeks the excitement and purity of a competition car and for whom total performance is paramount.

That capability is provided through innovative and elegant engineering solutions, with high specific outputs, pin-sharp handling, and weight saving features.

In Europe, the Integra set the tone with its 190 PS 1.8 liter engine and superb chassis dynamics, followed by the Accord Type-R which applied similar race-bred technology to the 4 door Accord and became the basis of Honda’s successful European Super Touring program.

The 1.6 Sport was the model to join the Civic 3 door line-up and, in keeping with its Sports moniker, and building on its fun-to-drive nature, gained a particularly purposeful appearance thanks to a number of styling cues taken from the Type-R.

These are more than cosmetic, however, and each of the additional body panels have been carefully shaped and tested to provide enhanced aerodynamic performance.

Type-R front and rear bumper spoilers effectively replace the lower section of the standard bumper panels; and their styling is continued by the new scalloped side sill garnish which distinctively flares just behind the door to blend in with the rear wheel arch and, beyond that, the rear spoiler.

Inside the 1.6 Sport, the striking exterior is mirrored by a Type-R steering wheel, leather shift knob, and white instrument faces with black surround.

The driving fun doesn’t come at the expense of high fuel bills, however. The excellent torque characteristics of the 1.6 VTEC engine mated to a 5-speed manual transmission deliver excellent performance matched to an outstanding economy.

It’s anniversary time for Swindon too!

Given that it has played such a key role in Civic’s success in Europe, it is only fitting that 2002 also marks the 10th anniversary of Honda’s European car plant at Swindon.

October 1992 witnessed the start of Accord production there and it was in 1995 that the Civic was introduced; over 500,000 Civic models have since rolled out of the UK plant.

Honda secured its place among the world’s leading car makers when in July 1972, the first Civic left the Suzuka factory in Japan.

Worldwide it caused a sensation with its design, technology, and low fuel consumption. A front-wheel drive, 1.2-litre aluminum transverse engined, hatchback, with an independent strut suspension, it came to characterize the archetypal compact vehicle long before the Golf.

The initial 54 hp engine was followed for Japan and the US with a 60 bhp 1169cc CVCC stratified charge engine with three valve head, while European models later received power outputs up to 72 bhp, followed by a 1488 cc version introduced in 1973.

The advanced and typically innovative CVCC or Compound Vortex Controlled Combustion (CVCC) technology was Honda’s solution to the Clean Air Act in the USA and based on the idea that it is better to create fewer pollutants during combustion than it is to remove them within a catalytic converter.

A small, high-temperature pre-combustion chamber set off a larger, weaker portion of the mixture enabling lean mixtures to be used, producing less carbon monoxide and oxides of nitrogen.

The second Civic generation saw external dimensions increased and the introduction of the first 5 door hatchback.

The fresh, sharp lines of this new ‘Europeanised’ series represented a major change in direction and the 3 door Civic received the renowned ‘Car-Design-Award 1984’ from the city of Turin and Piemont region.

In 1985 the engine series was largely switched to fuel injection in conjunction with catalytic converters. The first cat-engine, the 1.5-litre capacity unit, produced 90 horsepower at 5800 rpm.

In particular, the CRX became a favorite with the young and young at heart – a compact sports coupé whose 100 hp 1.5-liter engine delivered 0 to 60 mph acceleration in under 10 seconds and went on to a top speed of 124 mph.

Another innovation well ahead of its time was the Civic Shuttle; with its spacious interior and short wheel-base, it could legitimately be described as a forerunner of modern MPVs and certainly a forerunner of the current Stream.

From 1985 the Shuttle was equipped with Real Time 4WD, able to engage all-wheel drive automatically only when required.

This generation saw the introduction of four-valve-per-cylinder engines across all models.

For the first time, the double wishbone suspension system used on the Accord and Prelude was incorporated front and rear to guarantee excellent stability and handling.

From 1990 the 3 door model was available with a 125 horsepower 1.6-litre SOHC-VTEC engine, the first engine in the world which allowed variable valve timing and lift.

Installed in the CRX ESi (SOHC-VTEC with 125 horsepower) and VTi (DOHC-VTEC with 150 horsepower), Honda became the first manufacturer of a high-performance engine whose flexibility made it just as capable in town traffic as it was on the open road.

In the VTi version, the CRX was a pure performance variant and could reach a top speed of 138 mph.

The hitherto linear design of the Civic gave way to a more tapering one, and the reduced glass area – in spite of a greater wheelbase and length – provided a more compact appearance.

From a safety point of view, the fifth generation was responsible for the introduction of ABS and the Euro-Airbag (SRS 2).

With this generation, two new VTEC engines – a SOHC-VTEC and a VTEC-E engine – were introduced. During the ADAC’s ‘Eco Tour of Europe’, a Civic 3 door with the VTEC economy engine achieved a sensational and hitherto unsurpassed consumption of 47 mpg.

The hatch of the 3 door was horizontally divided which both enhanced its appearance and helped it to best-seller status.

In February 1993 the Civic range was supplemented by the very attractive American-built Coupe, while two years later the Swindon-built 5 door model appeared. This was destined to be the biggest selling Civic of all in the European market.

The 3 door model increased in size to 4.19 m and now featured clear glass headlights as well as a striking roof line.

Engine outputs were also increased without a fuel consumption penalty. The Civic 1.6i ES featured an electronically controlled CVT-gearbox for the first time.

In 1998 the Civic series was augmented by the introduction of the family-friendly ‘Aero deck’ estate, another Swindon built model.

Those seeking sports car performance could still opt for outputs of 160 or 170 hp, and the sporting flagship became the new CRX 1.6 VTi with the DOHC-VTEC engine.

In 1998, the much-loved CRX appeared in its final form as the special Motegi edition.

The new Civic has fresh and innovative styling and a distinctive short nose. It is 50 mm higher than its predecessor.

Notable features of today’s Civic are its exceptional roominess, its fascia-mounted gear lever and the remarkable performance/ economy combination of its petrol engines.

In May 2002, a new diesel-engine model was introduced into the range for European Civic models.

It was the second Civic model to be so equipped. The new Civic not only achieved 4-star Euro NCAP crash safety performance but combined this with a best-in-class 3-star pedestrian protection rating.

Performance cars like the Honda Civic Type-R must be driven only with the highest quality engine oils. If you are in a search for oil for your Honda Civic Type-R, you should check our best synthetic motor oil comparison.

And because engine oil needs to be protected from the debris, read our reviews and comparison for the best oil filters for Honda.

We believe that every auto enthusiast should have a latest generation battery charger and maintainer in the garage if he doesn’t want to be caught out by dead battery in the most inappropriate time.

That is why we took the time and compared the top quality battery chargers that you can use on your Honda.

In time with the launch of X-Bow’s media website. KTM shows the first images of a scale model.