Dual sport motorcycles are the most popular bikes you most often see on the road. Their goal is to get the bike out of the garage and start your adventure.

They are used for everything from going through the city to tourism and light off-road (understand the trampled trails).

They are heavier than Enduro motorcycles, but surely more reliable. Service intervals are long enough, between 3, 100 and 6,200 miles, making them suitable for long journeys. 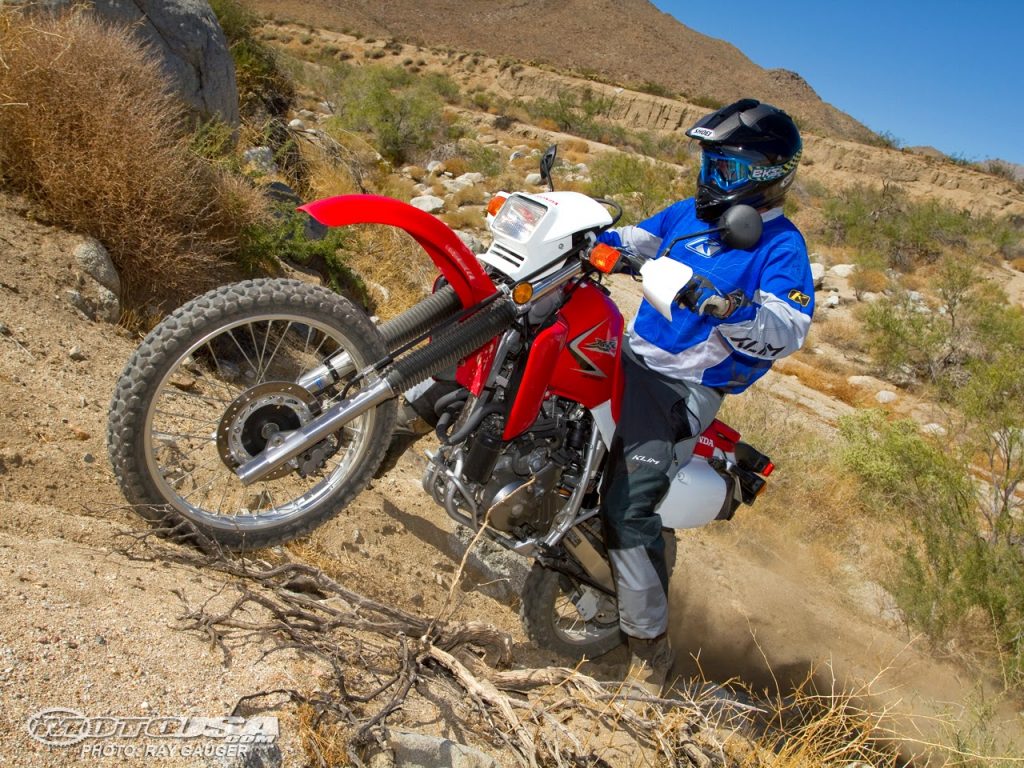 Dual sport motorcycles usually come out from the factory with tires which are suitable for asphalt and off-road (50-50). The bad thing about these tires is that they are not good enough neither on the asphalt nor on the dirt.

Some examples of a Dual sport are motorcycles such as Honda XR650L, Suzuki DR, DRZ, Kawasaki KLR650. These motorcycles are designed for riding on the road and gentle entry into the woods: off-road trails and flat terrain, without any harsh cross-country traverses.

Based on these motorcycles and their popularity and versatility, the current Adventure Bikes have been developed with large two-cylinder engines.

Some of them are the BMW GS, KTM Adventure, Ducati Multistrada, Triumph Tiger, and others.

In case a Dual sport motorcycle will be used more seriously for off-road, it is necessary to replace the tires as well as to provide protection for the engine.

Here we would also like to remind you that tunning up the bike means you have to tune up your protective equipment like wearing a quality helmet, proper dual sport gloves, boots, jacket, etc.

Despite these changes, for dual-sport machines, the most serious problem remains the weight. In the “forest” every kilogram in excess is equal to 10 kg. outside.

Riding a serious off-road with a machine weighing 375 – 400 pounds is extremely difficult and impractical.

The basic requirement for Dual-sport motorbikes is to be able to cope well with asphalt and to be able to have a smooth ride on a not so rough forest track. This puts them closer to cruiser motorcycles rather than to off-road.

An accident with such a bike “hurts more” because there are more elements to break. And if you are going off the road, get ready to fall frequently. Raising 400 pounds in the mud, too, is not an easy task.

After the Dual sport motorcycles, it is time to have a look at the “more focused” machines – Enduro bikes.

Enduro motorcycles are not particularly good for asphalt journeys. They are lightweight and powerful with a horsepower – weight ratio almost like a 600cc track motorcycle – 50+ horsepowers per 220 pounds.

Races with Enduro motorcycles are designed to test the endurance of the rider on a heavy off-road terrain.

The ride is a physical and mental exercise. The rider must overcome fallen trunks, stones, water obstacles, steep slopes, downhill, jumps, and more. 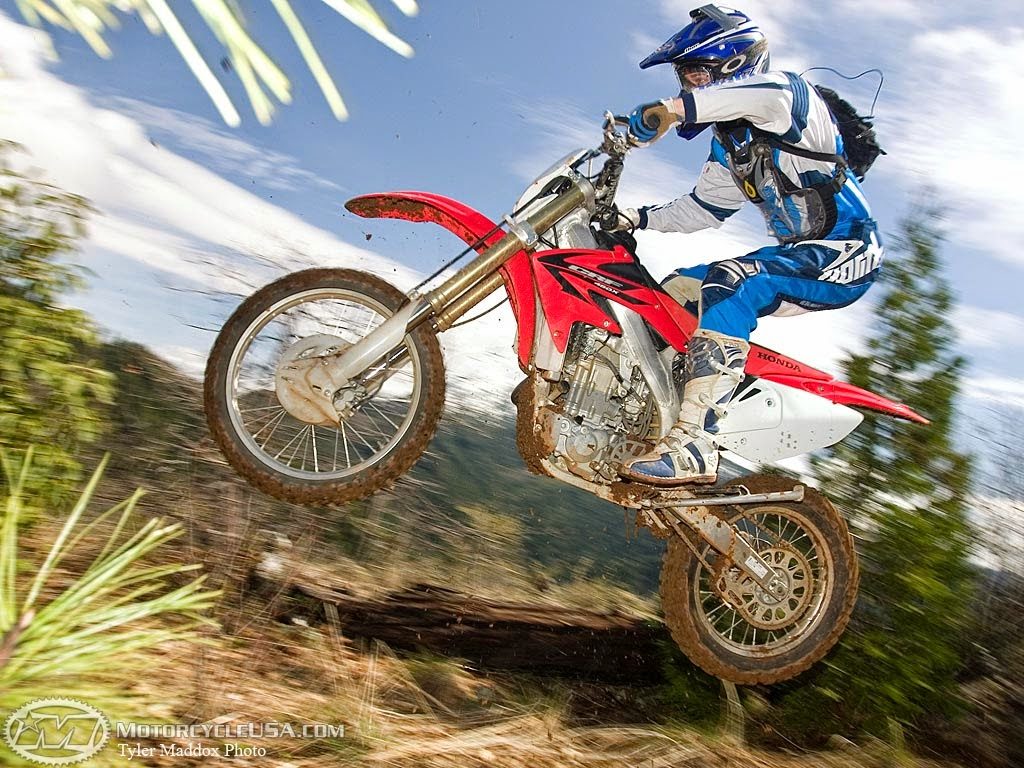 In enduro races often has different types of soil: sand, clay, mud, gravel, and even asphalt, which requires a lot of diverse skills from the machine and the rider.

In the biggest Enduro race challenge in the USA – Grand National Cross Country (GNCC) the motorcycles they use for the competition are 400cc.

The most popular Enduro bikes on the market are 250cc and 450cc even though we can also see 125cc which are very suitable for beginners.

The technical support of Enduro machines is not as demanding as the one of Dirt bikes but we can say that it is close to it.

Enduro motorcycles must meet all the requirements so that they can get a legal street license: exhaust system, lights, electric starter (for the new bikes), large fuel tank.

The engines of Еnduro motorcycles are de-tuned Dirt bike engines. This provides much easier maintenance compared to the motocross bikes and a much more relaxed temper.

But to be honest, 50+ horsepowers on 220 pounds can’t be really taken as a “relax temper”. Most often the de-tuning is made by adding more weight to the flywheel. This results in more torque at low revs.

The other difference is that the Enduro motorcycles have longer gears and most often more gears – usually 5 or 6. The suspension of Enduro motorbikes is often softer than the motocross motorcycles which also brings a significant difference.

On the other side of the Dual sport, motorcycles are the Motocross machines or Dirt bikes. These are machines constructed mainly for the track. The purpose of motocross motorcycles is to be fast and as light as possible. The suspension is hard. 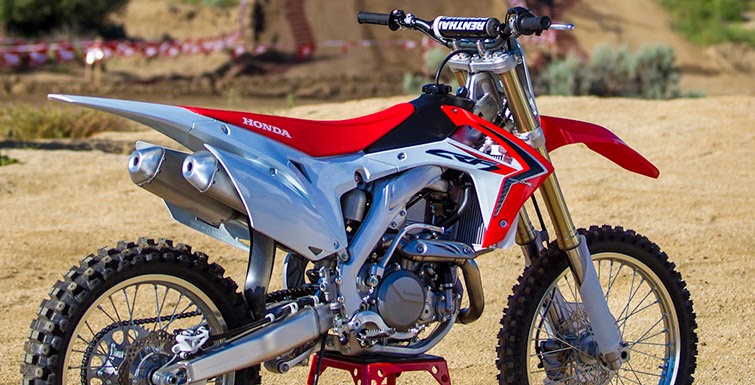 The gear ratios are noticeably short and the highest gear is usually fourth. Dirt bikes require serious maintenance: oil change every 20 moto hours, changing the pistons every 100 moto hours, and so on.

They are so greatly made to be used on the special track that every other ride outside it makes it difficult and unpleasant.

Motocross bikes are very similar in their general idea to the Supersport motorbikes which are also made mainly for the track. They are extremely lightweight, aggressive and every mistake turns out to be very expensive.

Furthermore, it is possible to ride on a motocross track with a good and lightweight Enduro motorcycle. It is also possible to go out of the road with a serious Adventure motorcycle such as BMW GS1200 or KTM 1190 Adventure.

After all, you have to choose a bike depending on your needs, skills, preferred riding terrains, and budget.

Supermoto motorcycles had to be the new hit in Europe or at least that was what the manufacturers expected. Their non-practicality, expensive maintenance, and price, however, predetermined their fate as a niche product rather than a mass product.

Companies like Husaberg, Husqvarna, Suzuki even stopped making the Supermoto bikes due to low demand. 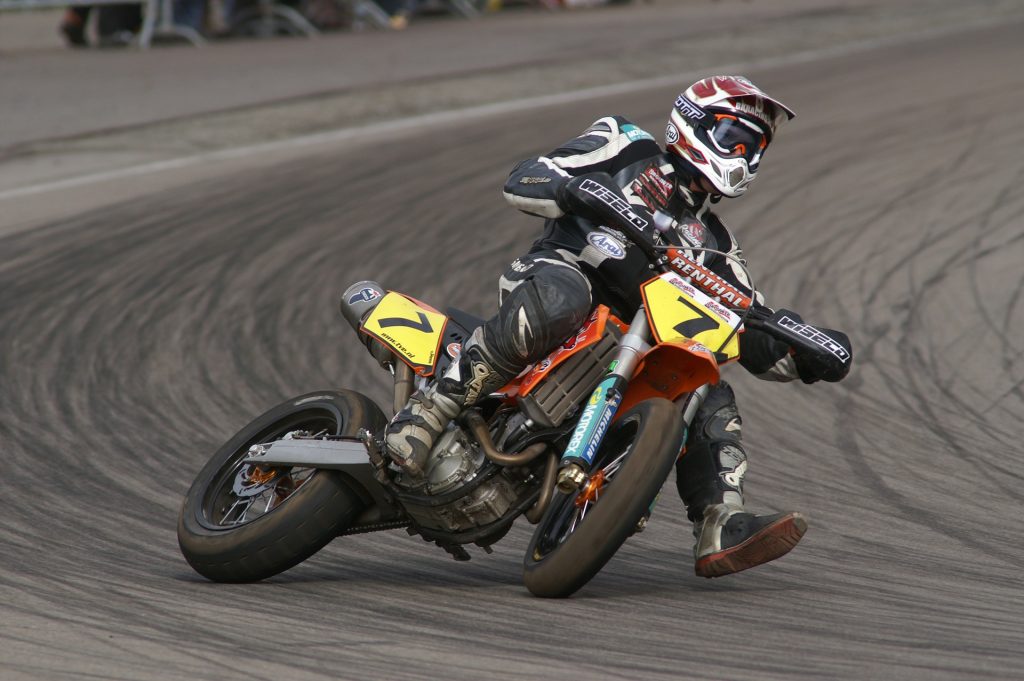 In the beginning, the Supermoto races started as an all-stars discipline where enduro, motocross, and supersport bikers were competing.

Nowadays, the Supermoto race is a separate discipline, and most of the races are held on small, technical karting tracks, with the addition of an off-road part.

Motorcycles are pumped up to the maximum and like motocross bikes require heavy maintenance.

So how we develop a supermoto motorcycle – take a standard dirt bike such as the Honda CRF450R, add special supermoto rims with pre-cut slicks, change the brake disks and pads and last but not least a new super powerful brake pump like Beringer, Magura, Brembo, etc.

The supermoto races use 450cc bikes, and a motocross bike, enduro, or dual-sport can be used as a donor. In any case, the suspension should be softer than the Enduro.

The advantage of the Enduro motorcycle is that it can get a street legal title, unlike the dirt bike, while still maintaining the high horsepower per kilogram ratio.

In dual-sport, the advantage is that maintenance fairly low, comfort is high, but the “fun factor” is reduced due to the weaker engine and high weight.

Supermoto allows the off-road style of riding to be carried on the asphalt. What does that mean?

It means that you can jump, you can have some easy off-road experience and you can speed up (be extremely careful though). This great flexibility makes these machines very interesting and desirable by adrenaline seekers.

So let’s have a look at some of the most interesting factory produced Supermoto motorcycles.

It looks like a Supermoto but riding is much like riding a big motorcycle. Due to its high weight (400 pounds), moderate suspension, weak brakes, and lack of power – 47 hp. on the shaft, this motorcycle is surely not the best choice to go for racing and riding on karting tracks. 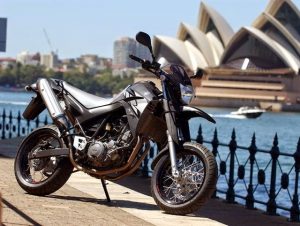 Not perfect for the racing track doesn’t mean it’s not absolutely suitable for traveling to your workplace. With the addition of an exhaust system, a sports filter, and a Power Commander, the machine comes “alive”. Well, do not expect miracles.

Yamaha XT660X remains a comfortable motorcycle for city rides, a light Saturday-Sunday hike, but nothing more serious than that.

Even Honda doesn’t call it a Supermoto! They call it a fun bike. An old concept that relies on the 650cc air-cooled engine that is still used in the Honda Dominator. 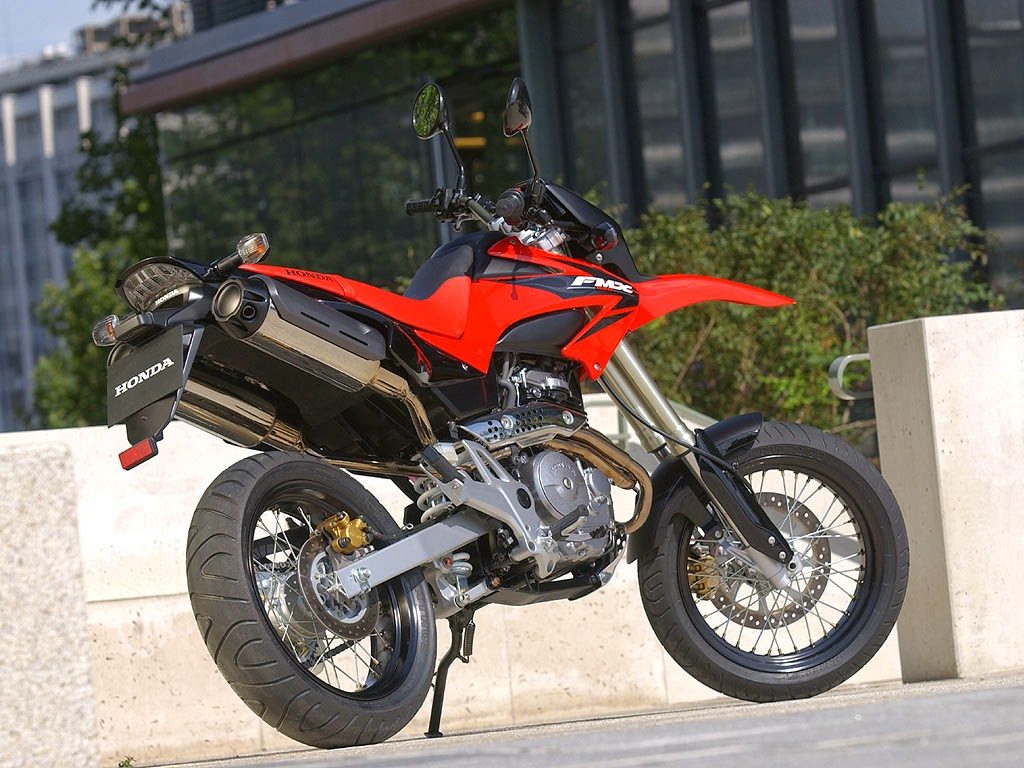 Honda FMX 650 is characterized by a high weight (375 pounds) and an extremely low power – 37 hp of the shaft (about 30 hp per wheel). It is not recommended for anything other than riding in the city and light Saturday-Sunday walks.

This machine remains the best factory-build Supermoto motorcycle. You can have fun on the streets without worrying about heavy maintenance (oil change is on 20 moto hours, pistons on 100 moto hours, etc.).

Weighing less than 330 pounds and 67 hp on the shaft (around 60 hp on the wheel), the SMC R is really a Supermoto bike, with great looks and behavior on the road. 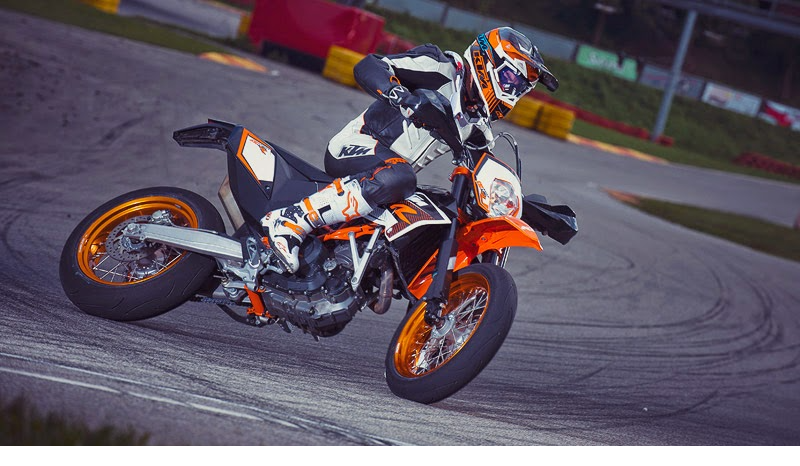 Well, it is inappropriate to compare it with the KTM 450 SMR, which has similar power but is 88 pounds lighter (and logically can not get a legal street plate).

The KTM 690 SMC R is the successor of LC4 bikes that have long been a success.

Unlike the typical single-cylinder supermoto bikes, there have recently been popularized Supermotards that suck the Supermoto style. And some examples are:

They are more practical (as long as Supermoto and practicality can co-exist) and can be used like any other “naked” bike while keeping the spirit of an off-road machines. 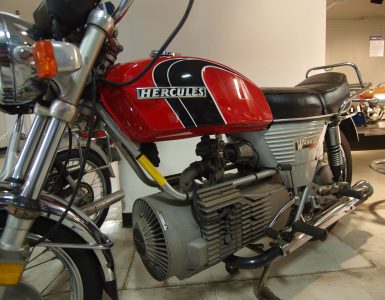 Since the Industrial Revolution, German engineering has held a reputation for excellence. But even they make mistakes.