Deer season! 10 Tips On How Do You Avoid Hitting A Deer With A Car?

Hitting a deer while driving – not a pretty sight! I have a very close relative who has totaled TWO brand NEW vehicles over the recent years because where they live, deer runs rampant, especially during the winter months.

I’ve learned a few things from my family member’s mistakes about how to avoid hitting a deer and I’d like to drop some science on you.

According to National Highway Traffic Safety Administration (NHTSA) estimates, there are approximately 1.5 million auto – deer collisions per year, resulting in damage losses of around $1.5 billion.

The Insurance Information Institute estimates that the average cost per insurance claim for collision damage is $2,800, with costs varying depending on the type of vehicle and severity of damage. 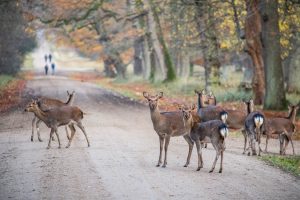 When you factor in auto claims involving bodily injury, the average rises to $10,000.

Statistically, most car-deer accidents occur during the winter months, which also coincides with the deer’s mating season.

It has also been noted that more accidents occur during the night, or anytime between dusk and dawn. This is attributed to the fact that deer are a very nocturnal animal and spend most of their time foraging at night.

Now that I’ve given you the facts, here’s the bottom line – when driving during deer season is sure to take every single precaution possible to be on the lookout for these docile, but oftentimes, deadly creatures that cause hundreds of deaths each year.

Here Are Some Tips That Might Help Minimize Your Chances Of Hitting A Deer:

If you have any insurance worries as to whether or not an animal collision is covered, it is, under the comprehensive section of your automotive policy.

Be safe out there!