The E-Class is one of the best selling models in the upper-range segment worldwide. A total of around 12 million units of the E-Class and its predecessor models have been sold to date

The Mercedes-Benz E-Class has been the epitome of safety, comfort, and quality for more than 60 years.

Mercedes-Benz has delivered 1.5 million units of the current E-Class series to customers since the model’s market launch six years ago.

“The current E-Class and its predecessor models have been the ‘heart’ of Mercedes-Benz for more than 60 years now,” says Dr. Klaus Maier, Executive Vice President Sales and Marketing Mercedes-Benz Cars.

“With its typical brand attributes that include safety, comfort, innovation, economy, and quality, the E-Class has delighted around 12 million customers worldwide across eight model generations.”

A total of 1,270,000 sedans from the current E-Class series have been delivered worldwide since the model was launched in 2002, while 230,000 customers have opted for the station wagon version.

The most important markets for the E-Class are Germany and the U.S., each of which accounts for approximately 25 percent of total sales. 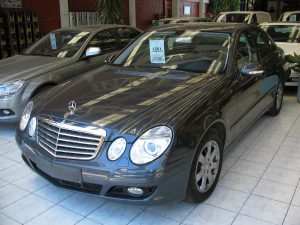 The most popular E-Class engine versions are the E 220 CDI and E350, each of which attracts ten percent of all E-Class customers. Some 40 percent of all customers select a diesel-powered vehicle.

In 2007 innovative BlueTEC diesel technology was launched for the first time in a passenger car in Europe – in the E 300 BlueTEC.

This European introduction was preceded by the launch of the E320 BlueTEC in the U.S. in October 2006.

With BlueTEC, Mercedes-Benz has succeeded in greatly reducing emissions and ensuring compliance with the EU5 emission standard.

Innovative BlueTEC technology has thus made the diesel engine one of the cleanest and most efficient drive systems in the world.

The “Germany – Land of Ideas” initiative of the German federal government and German industry presented Mercedes-Benz with an award in January 2008 for innovative research in connection with the brand’s introduction of BlueTEC technology to Europe.

In addition, the E 320 BlueTEC was chosen “2007 World Green Car” by automotive journalists from 22 countries in April of last year.

The current E-Class model series has received numerous other awards since its market launch in 2002, including an award for Best Car in the Upper Mid-Range Segment from Auto Motor und Sport magazine.

In the fall of 2006, the E-Class also clearly demonstrated its typical Mercedes brand attributes of exemplary safety, comfort, and economy during the longest long-distance diesel endurance test in automobile history: 36 E-Class cars went on a transcontinental marathon, with each vehicle driven approximately 14,000 kilometers from Paris to Beijing over 26 days.

In this endurance test under extreme conditions, Mercedes-Benz once again demonstrated the top performance of its ultramodern diesel engines in terms of emissions, fuel economy, and reliability.

If you want to know which is the best engine oil for Mercedes-Benz E-class you can find the full information in our report here. You can also check the top 8 oil filters for Mercedes in our complete guide here.

If it is time for a Mercedes-Benz battery replacement, we took the time to review and compare the 8 best options which you can check here and in case you want to take the maximum from your current battery, we advise you to choose a quality battery charger with maintainer for your Mercedes from our top models list here.