The Rumen is a car inspired by the classic cars of the thirties, both their style and their production philosophy.

Each car will be produced to individual customer order and specification. The car is much more an object of art than a utility vehicle for daily transport.

The style may be 1930’s but the technology is a purely 21st century. The body is crafted from carbon fiber composite which provides an ultra light and rigid structure in conjunction with a tubular steel frame.

The power output can be chosen as 61, 75 or even 100 HP for the brave. The drive is via a 6-speed sequential gearbox to the rear wheels.

In further contrast to its 1930’s roots, the car is equipped with ABS, stability control and the leather lined interior is air conditioned as standard. 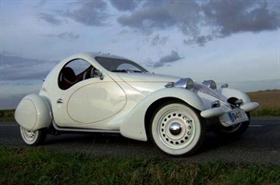 The very beginning of Four Stroke dates back to long before Four Stroke was founded. In the early seventies, when Roumen Antonov, inspired by the Bugatti Type 57 that he loved so much, started drawing a car.

After several sketches and drawings, Roumen made a scale model. Years went on and Roumen managed to escape from communist Bulgaria to Western Europe where he worked on the development of Automatic Transmissions. In his free hours, he started working on a 1:1 scale model his car.

In 1998 his workshop moved to Le Mesnil-Amelot, near Paris – Charles de Gaulle airport. Here the project was continued.

During that time Roumen created the company “Four Stroke” around his project. The mockup in 1:1 scale was ready just before the 2002 Paris Motorshow where it was shown to the public. The interest from the press and the public for the car was enormous.

Since 2002 the efforts around the project were mainly focussed on getting the good conditions together in order to continue the project: funding, a development team, production facilities, and a sales network.

Several entrepreneurs proposed to be the importer in the UK and in the USA and even proposed to take quite impressive numbers of cars.

During 2005 the design for series production has continued and is presented in its final shape on the Frankfurt Motorshow in September 2005.

The car is equipped with modern technology but finds its inspiration in the designs and production philosophy of the cars of the nineteen thirties. The car has been named “Rumen”.

The vehicle is a very light car in the pre-1940s style with the objective of having personalized vehicles made to order.

This car which is based on modern technology will be available with three different engine tuning levels.

As it is very lightweight, its performance is attractive and its stability can be compared to that of the best sportscars currently available.

The car will offer a top quality finish and can be tailored to meet customer’s requirements.

“Currently we work to prepare the first small serial production for the end of this year and we are happy to take your orders.

We have worked with “Technical Studio” to realize the initial vehicles for testing and also will prepare the production-ready vehicles with them.

We have a lot of interest from potential customers and are very happy with this. Our price will be established in relation to our clients’ orders. We intend for many people to have a base price of 40.000 Euros.

We also plan to make our vehicle available to the markets of UK, USA, and many other countries. “

Any sports and premium car like “Rumen” requires a strong battery because of the many electronics inside. We’ve collected data from industry professionals to rate the top 8 car battery brands and for those of you who already have a powerful battery, make sure to read our guide with the 7 best battery chargers with maintainers.

Engine oil and oil filter are another very important parts when speaking about the maintenance of cars like “Rumen”. Using quality motor oil along with a reliable oil filter will protect the engine, extend its life and possibly lower the fuel consumption. Make sure you don’t save bucks on that.